skip to main | skip to sidebar

H.L. Mencken's take on the Death of Heathen Gods


Where is the graveyard of dead gods? What lingering mourner waters their mounds? There was a time when Jupiter was the king of the gods, and any man who doubted his puissance was ipso facto a barbarian and an ignoramus.  But where in all the world is there a man who worships Jupiter today? And who of Huitzilopochtli? In one year - and it is no more than  five  hundred years ago - 50,000 youths and maidens were slain in sacrifice to him. Today, if he is remembered at all, it is only by some vagrant savage in  the depths of the Mexican forest. Huitzilopochtli, like many other gods, had  no human father; his mother was a virtuous widow; he was born of an apparently innocent flirtation that she carried out with the sun. When he frowned, his father, the sun, stood still.  When he roared with rage, earthquakes engulfed whole cities. When he thirsted he was watered with 10,000 gallons of human blood. But today Huitzilopochtli is as magnificently  forgotten as Allen G. Thurman. Once the peer of Allah, Buddha and Wotan, he  is now the peer of Richmond P. Hobson, Alton B. Parker, Adelina Patti,  General Weyler and Tom Sharkey.

Speaking of Huitzilopochtli recalls his brother Tezcatilpoca.  Tezcatilpoca was almost as powerful; he consumed 25,000 virgins a year.  Lead me to his tomb: I would weep, and hang a couronne des perles. But who knows where it is? Or where the grave of Quitzalcoatl is? Or Xiehtecuthli?  Or Centeotl, that sweet one? Or Tlazolteotl, the goddess of love? Of Mictlan? Or Xipe? Or all the host of Tzitzimitles? Where are their bones?  Where is the willow on which they hung their harps? In what forlorn and unheard-of Hell do they await their resurrection morn? Who enjoys their residuary estates? Or that of Dis, whom Caesar found to be the chief god of the Celts? Of that of Tarves, the bull? Or that of Moccos, the pig? Or that of Epona, the mare? Or that of Mullo, the celestial jackass? There was a time when the Irish revered all these gods, but today even the drunkest Irishman laughs at them.

But they have company in oblivion: the Hell of dead gods is as crowded as the Presbyterian Hell for babies. Damona is there, and Esus, and
Drunemeton, and Silvana, and Dervones, and Adsalluta, and Deva, and Belisima, and Uxellimus, and Borvo, and Grannos, and Mogons. All mighty gods  in their day, worshipped by millions, full of demands and impositions, able to bind and loose - all gods of the first class. Men labored for generations to build vast temples to them - temples with stones as large as hay-wagons.  The business of interpreting their whims occupied thousands of priests, bishops, archbishops. To doubt them was to die, usually at the stake.  Armies  took to the field to defend them against infidels; villages were burned, women and children butchered, cattle were driven off. Yet in the end they all withered and died, and today there is none so poor to do them reverence.

All there were gods of the highest eminence. Many of them are mentioned with fear and trembling in the Old Testament. They ranked, five or six thousand years ago, with Yahweh Himself; the worst of them stood far higher than Thor. Yet they have all gone down the chute, and with them the following:

Ask the rector to lend you any good book on comparative religion; you will find them all listed. They were gods of the highest dignity - gods of  civilized peoples - worshipped and believed in by millions. All were omnipotent, omniscient and immortal.  And all are dead.

This Sunday (Feb 3) we're playing at the Trumbull with Rifle Diet from Minneapolis.  Len is heading to the land of Blankets and Hounds so this will be our last show with him and as a four piece until he gets back next year.  We'll carry on in the meantime as a three piece with some new songs and evolutionary sound. 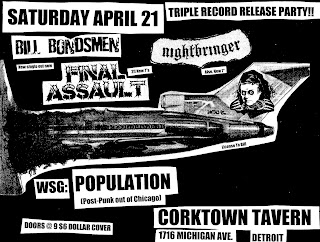 April 21 at the Corktown Tavern (1716 Michigan Ave, Detroit, MI), it's a triple record release show for Bill Bondsmen, Final Assault and ourselves, plus  Population from Chicago.  The Fight Like Hell 7"s are here and ready.  Covers are hand dyed, so it's taking a while to get the entire run ready for distribution, but we'll have plenty for these shows. 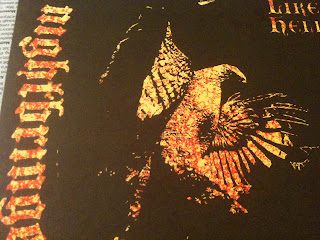 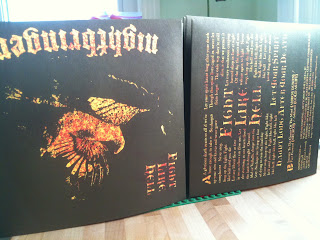 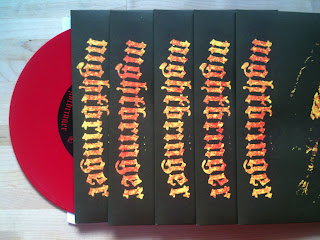 They're pretty sweet.  Covers of old Michigan and Ohio bands on the B side, namely the Amboy Dukes, Necros, and Cold As Life.  Give the A side a listen here.

And then the next weekend we're going to venture into deepest Indiana.  Friday, April 27th is in Fort Wayne, and Saturday, April 28th is in Indianapolis.  Haven't played their since the time the bass player of Vegan Reich wanted to fight the guitarist of my old band over a case of sideburns-inspired mistaken identity.  Details to follow.
Posted by Burai Core D&D at 7:13 PM No comments:

Someone made a baby so we haven't played in a few months. Time to get back at it. Fight Like Hell 7" will be out in a couple weeks at shows and for mailorder, with wholesale distribution in a month or two with the next Burai Core 12".


March 8 at Woodruffs, Ypsi
Nightbringer, Aggro Or Die +++
Posted by Burai Core D&D at 4:42 AM No comments:

Bandcamp, all the cool kids are using it

I made a Bandcamp site for us a couple weeks ago, pretty sweet.  You can download the demo, listen to the 7" and comp track, and today I put up the A-sides to the next two singles.


So that means they will be out in the next couple months.

I think the next show is May 21st at the Metal Frat, then June 10 with Origin of M at the Shelter.
May 21st - 8pm$5Weekend NachosAfternoon GentlemenNightbringerFrom HellOily Menace
Posted by Burai Core D&D at 2:29 PM No comments:

Woah, time for an update!

What the hell, its been like a year.  First, foremost and immediately, Burning Love are coming through the area for three shows and we're playing the first one.

We are also playing the sixth annual Michigan Meltdown in Grand Rapids on Friday with such luminaries as the Wankys and Lotus Fucker.  We're going to listen to nothing but the first two Slapshot records and AF "Liberty & Justice For..."on the way out.  Inside joke.  Check http://grscreamer.com for the info.

And then we're playing June 24th at the Lager House with H8 Inc and a few more.  That will most likely be our last show until September due to personal commitments for July and August. 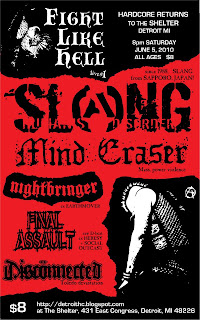 Back to the news.  We have started putting on a monthly hardcore show at the Shelter called Fight Like Hell.  Search for the group on Facebook, I have no idea how to link directly to it.  The first show was a week or two ago with Slang, Mind Eraser, (us), Final Assault, and Disconnected.  Thanks to everyone who came out and made it a success.

The second show is going to be July 24th with H8 Inc and All My Blood, plus one more.  The Suicide Machines show is upstairs at St Andrews, so this will be the after party, $6 or $3 with a SM ticket stub.

Then we'll be back in September, most likely with the Nightbringer 7" release show.  October's Fight Like Hell show is shaping up to have a certain reunion, we'll let the cat out of the bag once everything is confirmed. 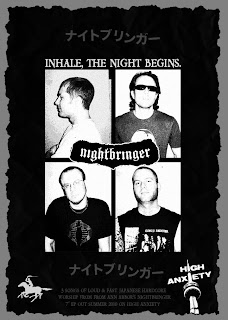 Wait, what was that?  A Nightbringer record?  Sure, what the hell, we've only been a band for six years. figured we might as well.  Due for release this summer on High Anxiety, three songs (One of These Days, No Sleep Till Death, and Death of Heathen Gods).  A veritable sonic hammer, wait and see.

We spent the last two months recording (ok, everyone else spent two weeks recording, then I spent two months overdubbing) a ton of instrument tracks.  First and foremost is the second 7", due out in September or October on Deer Healer.  Brand new, never demo-ed song 31st And Michigan paired with A Better Tomorrow, which is enhanced from the CIUT session version by bringing back Matt Simpson for some hot dual guitar action.  Somewhere around the same time the Spider Cuddler Detroit covers comp should come out, all current Detroit bands covering old Detroit bands.  Since we're really only a Detroit band by association, we picked a similarly non-Detroit band to cover.  Also in the works is the Schizophrenic Records cross border hardcore comp of Detroit and Windsor bands.  Two new tunes on that.  Next on the agenda is to con someone in Europe to compile all this stuff on a 12". 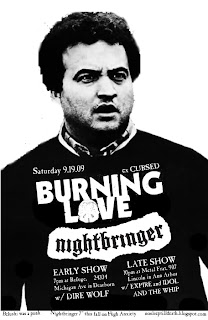 Saturday, 9.19.09, we're doing two shows with Burning Love from Toronto. The early show is at Refuge in Dearborn and the late show will be at the Metal Frat in Ann Arbor. It should be outrageously ridiculous.
Posted by Burai Core D&D at 6:53 PM No comments: